Use of Lasers In Dentistry 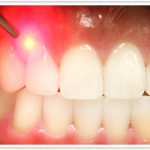 Technology has allowed the medical field to make many procedures faster and less painful. This applies to dentistry as well. Lasers have become widely accepted in many types of medical practice, and were first used in dentistry in 1994.

Lasers work by producing energy in the form of light. It is rather amazing that a tiny beam of light can actually be used as a cutting instrument. It vaporizes the tissue. This light energy also produces heat, which is why it is used to bond fillings and help lighten/whiten teeth. However, if a tooth already has a filling in it, lasers cannot be used. Compared to traditional cutting tools, a laser is extremely sterile—completely germ-free – and actually kills bacteria. Areas worked on by laser typically heal faster than with traditional methods.

Lasers can be used in several ways by dental offices. They can remove decay within a tooth or be used to harden/set a filling. They are frequently used to make in-office teeth whitening happen faster. The laser activates the bleaching solution that is placed on the surface of the teeth. Lasers are also used to move tissue such as a lesion in the mouth or a canker sore. They are used whenever a piece of tissue needs to be sent for examination—a biopsy. They can also be used to eliminate bacteria and even to reshape gums.

The use of lasers has become increasingly popular in root canal procedures. Endodontists—dentists who specialize in root canals—are finding lasers to be highly effective in providing pain-free, less time-consuming root canals. It is interesting to note that when lasers are used with soft tissue, sutures are typically not needed. Bleeding is also minimized.

Laser dentistry is very precise. It’s an effective way to perform certain dental procedures. It requires the dentist’s ability to control the power level of the laser as well as the length of time that the laser is exposed to the tissue or tooth. With skill, it is the ideal tool for treating a very small, specific area. Damage to surrounding tissue is reduced or completely eliminated.

Ask your dentist if they utilize lasers in treatment of patients. More and more dentists and especially endodontists are incorporating lasers into their everyday practice.  Depending on the situation, use of lasers can sometimes mean that anesthesia is not needed. For people who may have anxiety about dental procedures, use of a laser can help reassure them that the procedure just might not bother them at all!