Endodontists Demystify The Feared Root Canal—One Tooth At A Time 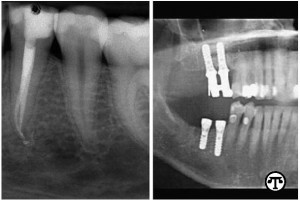 Radiograph of a natural tooth after root canal treatment (left) and extracted teeth replaced with dental implants (right). Courtesy of the American Association of Endodontists.

(NAPS)—When Ms. Barb Guerra went to her dentist with tooth pain, the simple words “root canal” filled her with dread. But after having the painless proce­dure performed, she realized her worry was for naught.

“I was pleasantly surprised when I had a root canal,” Guerra said. “I really didn’t experience any discomfort at all.”

Misplaced fears like Guerra’s aren’t uncommon. In a new con­sumer survey by the American Association of Endodontists (AAE), nearly half (48.5 percent) of survey respondents said they perceived root canal treatment as “excruciatingly painful,” and ranked the treatment just below a spinal tap in terms of discomfort.

But these perceptions don’t reflect the realities of modern treatment, something that pa­tients are realizing firsthand.

In fact, a separate AAE study showed that patients who have experienced root canal treatment are six times more likely to describe it as “painless” than those who haven’t had the treatment.

The expertise of endodontists, the dentists who specialize in root canal treatment, combined with anesthesia and advanced technolo­gies, have made root canal treat­ment a procedure that can be as routine as having a cavity filled.

The treatment usually lasts a half-hour and has a 95 percent success rate in saving abscessed or infected teeth.

When patients are told the inte­rior of their tooth is badly infected and requires treatment, they have three choices: extraction of the tooth with no replacement, extrac­tion and replacement with an implant, or root canal treatment.

Patients who extract the tooth and do not replace it can have a difficult time chewing, have an increased risk of gum disease and their teeth may shift. Extraction with implant replacement in­volves having a prosthetic tooth screwed into the jaw.

Root canal treatment is the only option that preserves the nat­ural tooth. “It’s always best to save the natural tooth,” says AAE Pres­ident John S. Olmsted, D.D.S., M.S. “Nothing looks, feels or func­tions like them.”

Root canals generally require one visit for the treatment plus another for the placing of a crown on the tooth, whereas placing an implant typically requires multi­ple surgeries.

Root canal treatment removes the damaged pulp, or soft inner tissue containing nerves and blood vessels, from the tooth, and then the endodontist cleans, fills and seals the canals. The tooth is then restored with a permanent filling or other restoration, allowing it to once again function normally, often for a lifetime.

“I had horrible pain—before I had root canal treatment,” said Guerra. “Now my tooth is pain-free.”

A survey by the American Association of Endodon­tists showed that patients who had root canal treat­ment are six times more likely to describe it as “pain­less” than those who haven’t. For more information, visit www.rootcanalspecialists.org.