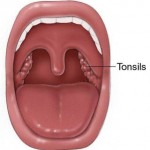 Have you ever wondered why we have tonsils? And why it’s sometimes best to have them removed?

If you’re a baby boomer, you might remember that 40 years ago, a tonsillectomy was virtually a rite of passage. Indeed, even earlier, removal of tonsils was actually  fashionable.

But that was then. Let’s look at the facts now and then determine if or when it’s medically necessary to take them out.

Tonsils are oval-shaped masses of lymphatic tissue. Officially, we have five: two are located at the back of the throat—known as “palantine tonsils”, and two sit on the base of the back of the tongue. The adenoid, often considered a separate tissue, is in fact also a type of tonsil. It lies in the back of the nose.

For general purposes, however, we normally think of “tonsils” as those at the back of the throat.

The role of Tonsils in Fighting Infection

You might have heard that tonsils are “vestigial”, meaning our bodies don’t need them at all. Not true. Although medical professionals have a divided opinion about their effectiveness, they clearly do play a role in our immune system by defending the body against infection.

As part of our extensive lymphatic  structure, their strategic location allows them to act as a filter, trapping bacteria and viruses entering the body through the mouth or nose. They also produce lymphocytes and antibodies to fight infection.

However, the jury is still out on whether these small tissues ultimately help or hinder our bodies’ immune system.

Tonsils are most active before puberty, which explains why so many kids get chronic sore throats accompanied by fever. Unfortunately, tonsils can easily get swamped by incoming bacteria and viruses and eventually, become overwhelmed. The result? Rather than fighting infection, tonsils get infected themselves. Tonsillitis then occurs.

Once your tonsils are diseased, due to tonsillitis or other causes, they are ineffective in fighting infection and can lead to complications.

Complications of tonsillitis run from the merely unpleasant to the seriously dangerous. They include:

Reasons to get a Tonsillectomy

A tonsillectomy generally refers to the removal of the palatine tonsils—those at the back of the throat.

According to the American Academy of Otolaryngology–Head and Neck Surgery (http://www.entnet.org/), definite indications for a tonsillectomy include:

One of the most interesting recent studies about tonsillectomies and sleep apnea involved Louisiana State University, which reviewed studies of children suffering from sleep apnea, about a third of whom also had bedwetting problems. After these children had their tonsils removed, the rate fell significantly, with only about 16 percent still having bedwetting issues, leading researchers to believe there is some relationship between nighttime bedwetting and sleep apnea.

Although a tonsillectomy is a very common — and simple — operation these days, the surgery is more painful in adults than in children.

Now that dental professionals consider a holistic approach to dental and oral care, many hear about tonsils and adenoids because they can create breathing, sleep, jaw development, and other oral problems for their patients.

Dentists are sometimes asked whether removal of tonsils and adenoids will eliminate factors that are contributing to a child’s abnormal jaw and bite development. The answer is problematic, since both sets of tissues may shrink over time, thus improving airway flow, resulting in improved oral development.

However, surgery is a medical rather than a dental issue, and a qualified dentist will refer the patient to a physician for professional advice.